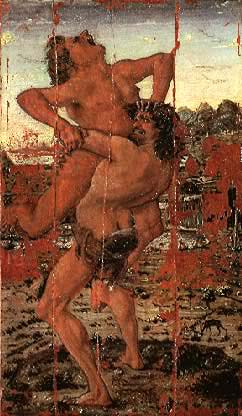 “Heracles did not return to Mycenae by a direct route. He first traversed Libya, whose King Antaeus, son of Poseidon and Mother Earth, was in the habit of forcing strangers to wrestle with him until they were exhausted, whereupon he killed them; for not only was he a strong and skilful athlete, but whenever he touched the earth, his stength revived. He saved the skulls of his victims to roof a temple of Poseidon. It is not known whether Heracles, who was determined to end this barbarous practice, challenged Antaeus, or was challenged by him. Antaeus, however, proved no easy victim, being a giant who lived in a cave beneath a towering cliff, where he feasted on the flesh of lions, and slept on the bare ground to conserve and increase his already colossal strength. […] In preparation for the wrestling match, both combatants cast off their lion pelts, but while Heracles rubbed himself with oil in the Olympian fashion, Antaeus poured hot sand over his limbs lest contact with the earth through the soles of his feet alone should prove insufficient. Heracles planned to preserve his strength and wear Antaeus down, but after tossing him full length on the ground, he was amazed to see the giant’s muscles swell and a healthy flush suffuse his limbs as Mother Earth revived him. The combatants grappled again, and presently Antaeus flung himself down of his own accord, not waiting to be thrown; upon which, Heracles, realizing what he was at, lifted him high into the air, then cracked his ribs and, despite the hollow groans of Mother Earth, held him aloft until he died.
Some say that this conflict took place at Lixus, a small Mauretanian city some fifty miles from Tangier, near the sea, where a hillock is shown as Antaeus’ tomb. […] It is also claimed that the Gardens of the Hesperides were the nearby island, on which stands an altar of Heracles; but, except for a few wild-olive trees, no trace of the orchard now remains. When Sertorius took Tangier, he opened the tomb to see whether Antaeus’ skeleton were as large as tradition described it. To his astonishment, it measured sixty cubits, so he at once closed up the tomb and offered Antaeus heroic sacrifices. It is said locally either that Antaeus founded Tangier, formerly called Tingis; or that Sophax, whom Tinga, Antaeus’ widow, bore to Heracles, reigned over that country, and gave his mother’s name to the city.”

The small panel painted in tempera on wood by the Renaissance painter Antonio Benci, also known as “Il Pollaiolo” (ca.1431-1498) is on exhibit until 28 April at the Fondazione Alda Fendi – Esperimenti – Foro Traiano in Rome. In an interesting juxtaposition, the boxing match between the protagonists Alan Bates and Oliver Reed, from Ken Russel’s Women in Love, is projected in an adjoining room, making it possible to compare the musculature of Benci’s painting with the filmed movements of the two fighters. In the leaflet accompanying the exhibit, one reads: “The muscular tension of the nude bodies, grappling with each other as they fight, shows the artist’s interest in human anatomy and in particular for bodies in motion.”

This small panel, according to the literature available at the exhibit, has been through quite a tumultuous history: it became part of the Galleria degli Uffizi in 1798, was stolen during the Second World War from Florence, only to reappear in Los Angeles in 1963. It was returned to the Florentine museum in 1975. The presentation in Rome since 5 April was done by the Glasbau Hahn in Frankfurt, as a gift of the Fondazione Alda Fendi. After the exhibit closes tomorrow night the entire display will be transported back to Florence where the panel will be rejoined with its companion piece, “Heracles and the Hydra”.